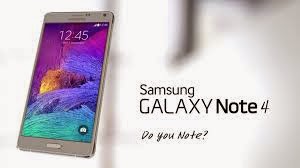 It would be easy enough for Samsung to just respond to the rise of phablets with a bigger phone (and it has ? the Samsung Galaxy Mega exists for people who really want a tablet-size phone), but it's actually exercised healthy restraint. The Note 4 has the same-size screen as Galaxy Note 3, a 5.7-inch SuperAMOLED display that's still plenty big. Definitely, Samsung Galaxy Note 5 is expected to have more as we await its release in 2015.

The Samsung Galaxy Note 4 has an ultra-sharp display, an excellent camera and a stylus that provides a top-notch handwriting experience. It's available from AT&T, Verizon and Sprint.
Show As List What makes the Galaxy Note 4 really, well, notable is the resolution of that display. It's the first Samsung phone to have a Quad HD display, meaning it?s crazy sharp with a resolution of 2,560 x 1,440 ? that?s more pixels than an iPad, and basically the same resolution as a 27-inch iMac. There?s no way you?ll ever see a pixel on this screen unless you hold it right up against your eye (which you'll actually do when using the Note 4 with the Gear VR headset, but that's another story).
Occasionally, the display will betray the fact that few developers are considering such a high resolution when building their apps. The intro screen for Dots, for example, has very tiny text. Android typically does a good job of scaling, though, and most apps look at least normal, and many look fantastic. The tables in Zynga Poker have never looked sharper. 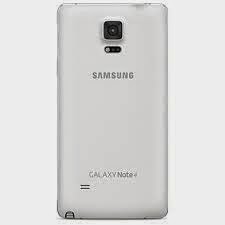 The Note 4 has a better design too. The Note 3 had a metallic frame, but Samsung decided to put a grooved pattern on it reminiscent of finer watches. I liked the design, but it struck many as too retro, and Samsung made a course correction with the Note 4: the frame is still metal, but it's smooth with beautiful chamfered edges.
Samsung continues its obsession with faux leather with the Galaxy Note 4's backside, although it ditches the "stitching" along the sides this time. It's actually a great choice ? the texture is perfectly grippable, and it's on the classy side without being showy. Like most Samsung phones, the back is removable, revealing slots for microSD (capable of augmenting storage up to 128GB) and the microSIM card.
The back of the Samsung Galaxy Note 4 has classier faux-leather texture than previous models.
The Note 4's camera protrudes slightly but noticeably from the back. This is an unfortunate trend in cellphone design, as our demands for better cameras have necessitated larger components, but it slams head-on into another demand: ever-slimming form factors. Even the new iPhones have cameras that jut out from the profile. The Note 4 at least has an excuse ? it's one of the few smartphones to include optical image stabilization, but it's still annoying.
When you hold the Galaxy Note 4, it feels substantive. The 6.21-ounce weight is on the heavy side for its size class (the iPhone 6 Plus is 6.07 ounces), but it also packs a hefty 3,220 milliamp-hour (mAh) battery as well as the S Pen stylus, the signature accessory of every Galaxy Note.

The Note 4's S Pen is pretty much identical to the Note 3's, and it works almost exactly the same, too. The Air Command menu appears whenever you slip the stylus out of its slot, providing some needed shorthand that reminds you of its most useful quick functions, like writing quick notes that you can pin to your home screen. 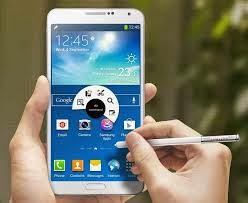 The Quad HD display and pressure-sensitive S Pen combine for an excellent writing experience.But things are better this time around. The Quad HD display gives your writing that much more texture, and the Note 4's robust Snapdragon 805 processor ensures your pen marks appear instantly. The Galaxy Note 4 delivers by far the best handwriting experience I?ve seen on a touchscreen, and that includes Microsoft?s excellent Surface Pro 3.
S Note, the default app for writing notes, hasn't changed much. Like a lot of Samsung software, it has some powerful features ? like handwriting-to-text conversion that's surprisingly accurate ? but it's not big on convenience or intuitiveness. If you're not familiar with the app, the mere act of closing a note requires too much investigation and patience.

The Note 4 has a wide-angle selfie mode, letting you fit more people in the frame at the expense of a few right angles. Look for this one to get some use at the next Oscars.
Show As List Samsung throws in a few tricks to improve your selfies, too. While using the 3.7MP front-facing camera, you can touch the heart-rate sensor on the back to snap pics, which is a little better than tapping the onscreen shutter. There's also a wide-angle selfie mode: Just tap, move the camera side-to-side, and you can get even a large group in your selfie ? as long as you don't mind a little bendiness on the edges. 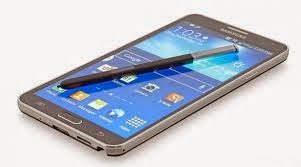 Multi-tasking is a standout feature on the Note phones and it keeps getting better. Before, you could run two or three apps on the screen at the same time, but with the Note 4, you can go as high as five. You can even change the size of each window, just like, you know, Windows. As for how practical this is ? even on a screen as big as the Note?s ? is a little suspect, but I really like one aspect of it: the ability to shrink an app to an ever-present icon, Facebook chat head-style.
The Galaxy Note 4 includes almost all the bonus features of Galaxy S5, too. You get the kinda silly heart-rate monitor, the ultra-low-power mode that stretches your battery life with a vintage black-and-white look, the download booster that combines your Wi-Fi and LTE connections, and the fingerprint scanner, which still isn?t as reliable as the iPhone?s, unfortunately. One feature the Note 4 doesn't share with the S5 is water resistance, so showering with it is out.


- Samsung Galaxy Note 4 Specifications And Images
Samsung is not just one of the world's largest producer of smartphones, phablets and tablets but also a giant when it comes to the technology that is found in her devices. One of such technology advancement is being able to use the new Samsung Galaxy...