﻿ Stay Away From iOS 8.1.1 For This Reason
Nigeria Tech

Stay Away From iOS 8.1.1 For This Reason

Apple have released an update to the iOS 8.1 firmware for all iOS 8 capable devices. The latest iOS 8.1.1 firmware according to Apple fixes bugs and makes older devices more snappier during use. 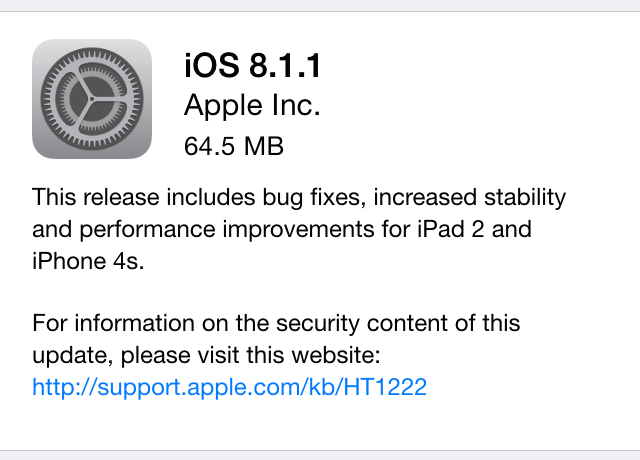 This of course is a great thing, however, for those willing to keep their jailbreak, there is a drawback when this update is applied as pointed out by seasoned hacker +MuscleNerd
+MuscleNerd  earlier today made a tweet warning jailbreakers to stay away from the new iOS 8.1.1 update if they intend to have a jailbroken Apple Device. From the tweet below, the message is clear and concise. 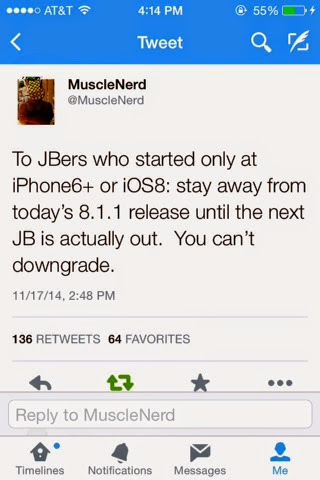 If you are on iOS 8.1 and haven't upgraded to iOS 8.1.1, you can jailbreak your device using the Pangu jailbreak tool in shown in one of our "How To" guides here.
Therefore, if you still to hold on to your jailbroken iPhone, you are advised to stay away from iOS 8.1.1 update. However, if you don't care for a jailbroken iPhone you can go ahead to upgrade your iPhone to the latest iOS 8.1.1 update.
It is usually advised that you upgrade via iTunes instead of OTA updates - something we've too often.
Like our Facebook page and follow us on Twitter for more smartphone news and tutorial


- Apple Releases Ios 8.1.3
Talk of Apple releasing another iOS 8 update is been circulating for sometime and it has finally materialized today.  The iOS 8.1.3 update was released and most peo. e that haven't jailbroken their device can immediately download the update...