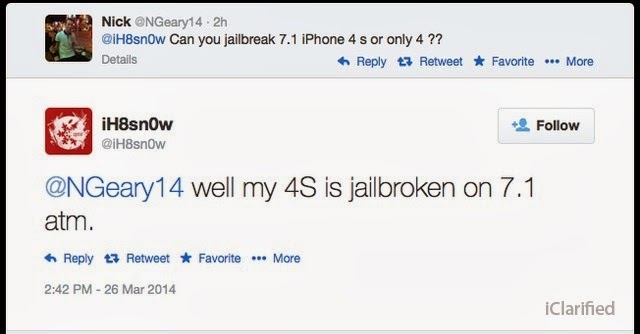 It was believed earlier that  only A4 devices like the iPhone 4 running iOS 7.1 could be susceptible to an untethered jailbreak, however, iH8sn0w have now demonstrated that his device which is an A5 device has also been jailbroken untethered.
The inal words from these two elite hackers is that there is no plan to release the jailbreak publicly for now.
Not releasing the untethered jailbreak publicly makes sense as the exploded used could be used for iOS 8 jailbreak possibly. Releasing it now may allow Apple coders to patch the exploit hence making it difficult to get an iOS 8 untethered jailbreak in a good time.
We shall keep you posted on everything jailbreak as it becomes available.
Like us Facebook, Twitter and Google+ for all jailbreak and smartphone news.

- Untethered Ios 6.1.3 Jailbreak For Iphone 4 Has Been Found
There's a strong possibility that iOS 6.1.3 will see an untethered jailbreak soon for iPhone 4 as tweeted by a hacker by the Twitter handle @Winocm. Presently, only iPhone 3GS old bootrom can be jailbroken untethered on iOS 6.1.3. iPhone 4 and 3GS...