﻿ Untethered iOS 6.1.3 Jailbreak For iPhone 4 Has Been Found
Nigeria Tech

Untethered iOS 6.1.3 Jailbreak For iPhone 4 Has Been Found

There's a strong possibility that iOS 6.1.3 will see an untethered jailbreak soon for iPhone 4 as tweeted by a hacker by the Twitter handle @Winocm.
Presently, only iPhone 3GS old bootrom can be jailbroken untethered on iOS 6.1.3. iPhone 4 and 3GS (New BR) can be jailbroken tethered only while iPhone 4S and 5 can't be jailbroken at all.
However, according to @winocm, he believes that he has found a binary code that can be used to achieve an untethered jailbreak for iPhone 4 on iOS 6.1.3 but "it needs some work". That was the good news which lasted for about 2hrs, then came the bad news. 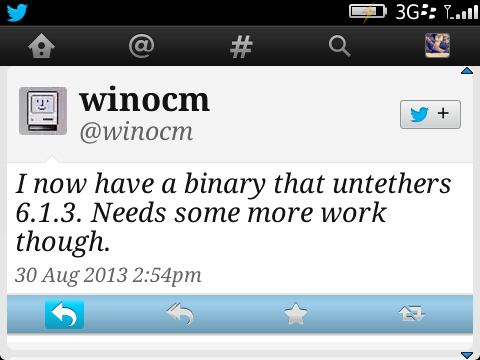 Although he was quick to point out that the code "barely work on the iPhone 4" and thus he's not too sure it would work out. That is just wicked! That was the bad news.
Seriously! Some people's hope were just dashed! Some may come down with a heart attack for they have waited for a news of untethered iOS 6.1.3 jailbreak for their iPhone 4 like forever. 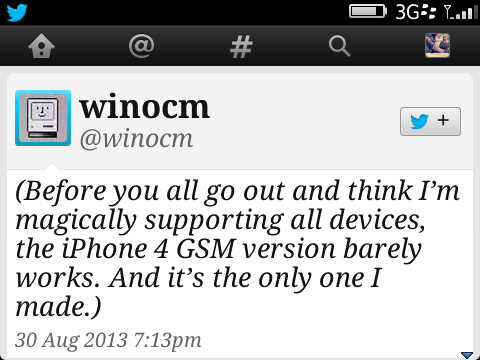 Anyway, seeing how close we are to officially getting iOS 7 on our iPhone 4, 4S, 5, 5S devices, and how more notable hackers are working indefatigably and consistently to release a jailbreak for iOS 7, there should be little cause for worry.
Let's wait on the super heroes, the usual suspects we've always known to bring us a good and working untethered jailbreak for iOS 7 rather than getting our hopes up by news from someone who we barely know.
Like our Facebook page and follow on Twitter to be among the first to know of jailbreak good news.


- Iphone 5 Running Ios 6.1.4 Has Been Jailbroken
Few weeks left before Apple releases the latest iteration of the iPhone top the world, that is, iPhone 5S and 5C and something interesting just popped up. @Winocm, the hacker and coder who tweeted few days back that he had gotten a way to jailbreak both...