iOS 7 is becoming gradually old even though iOS 7.1 was just released few days back.

Rumors of iOS 8 isn't new as its well known that by now, Apple would obviously be working on the next Apple device and the iOS version on it.

For now, we do know a little about the next gen iPhone but no so much about the iOS until now when a screenshot of an iPhone running iOS 8 firmware was leaked as shown in the image below. 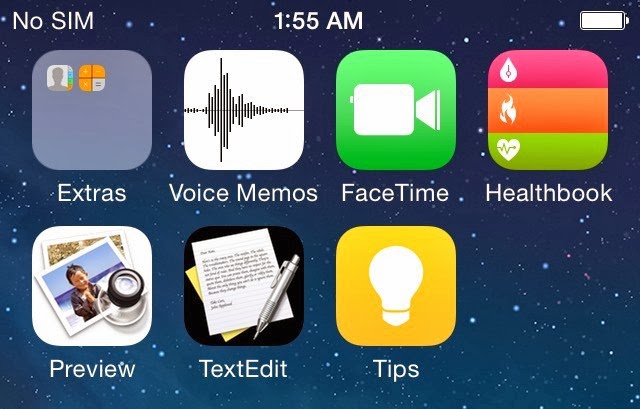 From the image, you would see an icon known as Healthbook, TextEdit, Preview and another known as Tips. We do not have a full understanding of what these apps would do but the name alone pave way for us to believe that the iPhone 6 would by "health-conscious".
Not only was a section of the home screen leaked, but also a screenshot of the About section was leaked.

While we can't say much about the legitimacy of the images, yet in does offer some amount of insight to what we should be expecting in iOS 8.
Definitely, the final product would see changes and additions but its good to have bit by bit information about the next iOS that would power the next gen iPhone 6.
Like our Facebook page and follow us on Twitter for more smartphone gist and helps.


- More Detailed Images Of Iphone 6 Surfaces
As we move closer to the unveiling of the iPhone 6 by Apple come September 9th 2014 more clearer and detailed images of the next iPhone 6 are showing up.  It's usually normal to see better images of a flagship smartphone leak to the world when...

- How To Make Your Iphone Home Button Last Longer
There are two most important buttons on the iPhone that you won't want to lose. That is the Power button and the Home button. If your power button is faulty you are going to feel it as you won't be able to perform many actions like screenshot,...