If you are wondering when Tecno will release yet a new device to the market, then I like to tell you that you should wonder less as there is a new Tecno smartphone in the market now with outstanding features and specs. This one is called Tecno M7 as shown in the image below as it came directly from Hong Kong. Its very similar to Tecno Phantom A+ but the price is very low. 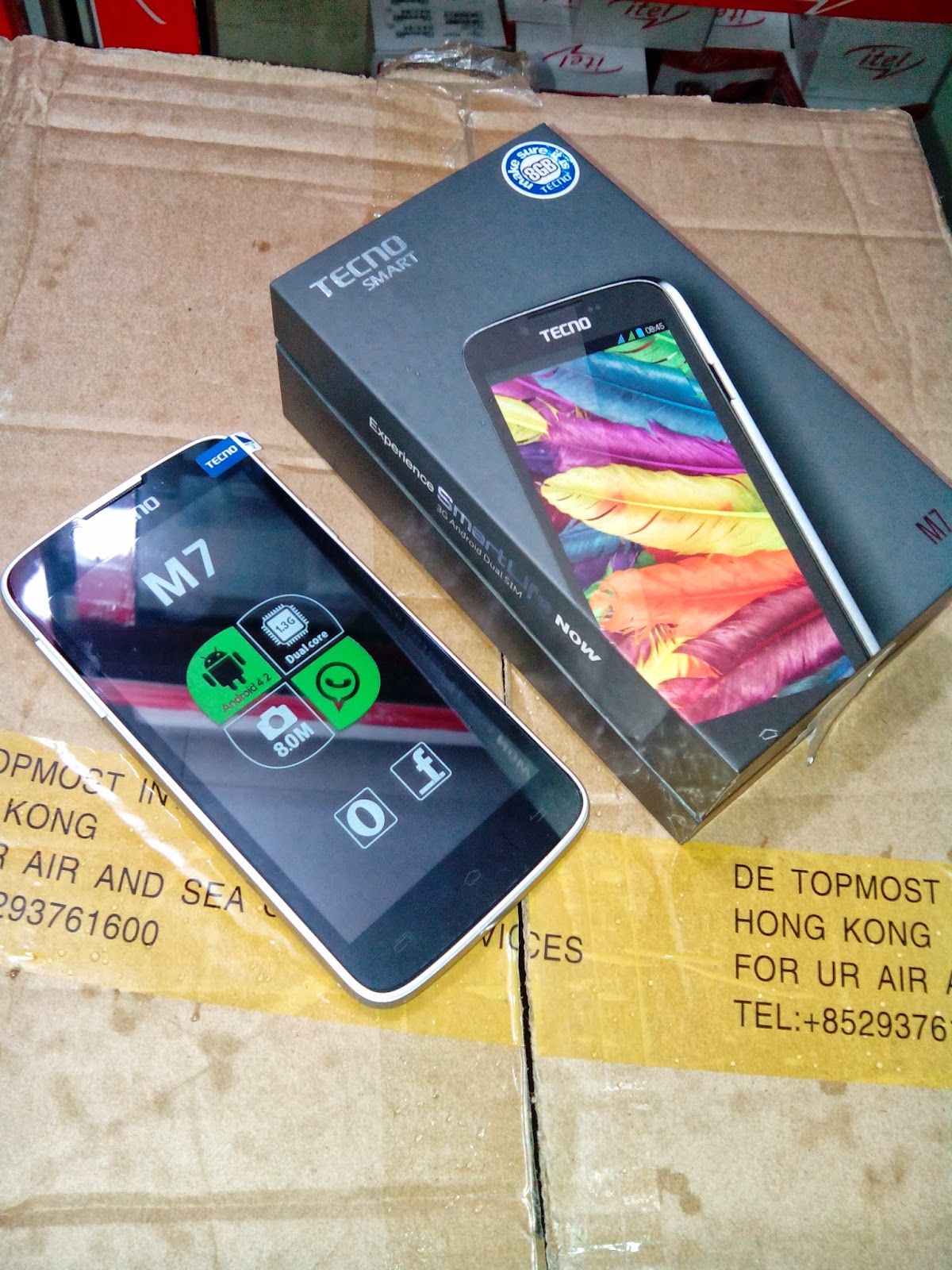 Let me quickly give you the specification and price of this new Tecno phone. 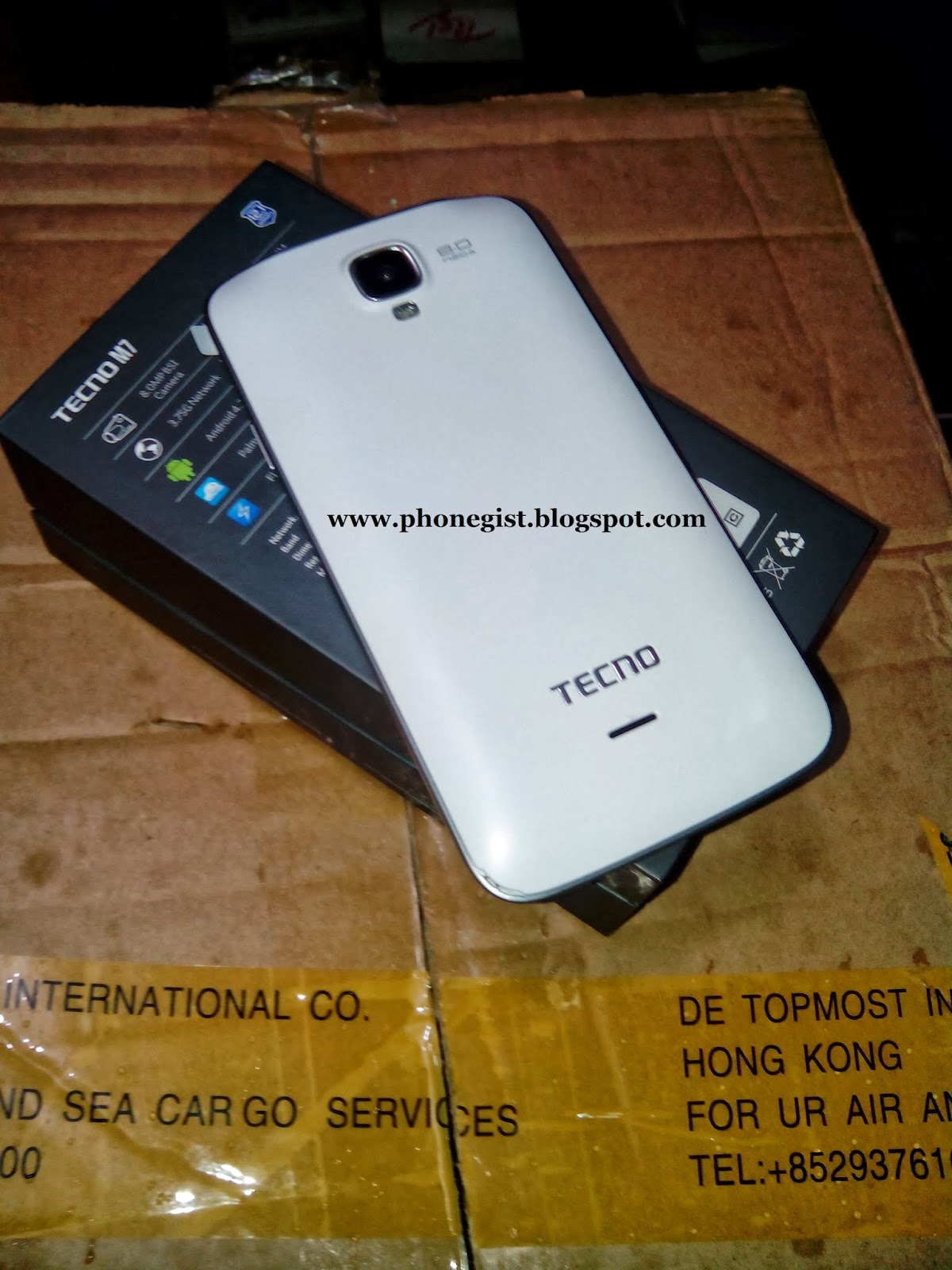 Dimension and Weight
Tecno M7 has dimensions 146.7 x 76 x 10.4mm and weighs about 135g
Network and SIM
Tecno M7 is a 3G/2G network capable of transferring and receiving data at 3.75G network. Its a dual SIM smartphone with SIM 1 operating at both 2G and 3G while SIM 2 is operating just 2G network. Its band is GSM900/DCS1800/WCDMA2100MHz
Operating System
Tecno M7 is operating on Android 4.2.1 Jelly Bean
Processor
Though i was expecting to see quad core in this area, but well, Tecno M7 comes with a dual core processor clocked at 1.3GHz
Memory and RAM
This device comes with 1GB of RAM and internal memory of 4GB and extra 8GB of MicroSD card already installed. Of course, it can support memory up to 32GB if need be.
Screen and Resolution
Tecno M7 has a 5.0 inch capacitive touchscreen with a resolution of 480 x 854 (FWVGA).
Camera
This device is bagging a 8MP BSI back camera and a 2MP front VGA camera. It gives you a high quality image quality. As far as i can tell, it gives up to a resolution of 2448 x 3264px, which is at par with that of Tecno Phantom A+.
Battery
As usual, Tecno devices always comes with removable batteries and this is no exception. It comes with a 2000mAh battery that is removable.
Connectivity
It has WiFi, WiFi Hotspot, GPS, Bluetooth 4.0 and of yes a mini USB port to connect to computers.
Sensors
The usual suspects are the ones we expect here without surprises and as you might have guessed, Proximity, Light and G sensors are all present in the device.
Pre-loaded apps
Apps like Gmail, Facebook, Whatsapp, Flash share, Palm chat are all pre-loaded into the phone.
Audio and Video
As usual, it supports all popular audio and video files and can play even more with the help of various video and audio players when installed.

Inside The Pack
As you would expect, the packaging is exactly like the Tecno Phantom A. It comes with an earphone, USB cord, a flip case and a two pin adapter with a USB port.
Price
One thing that blew my mind away was the price Tecno is offering this piece of smartphone. Its being sold for N26,000 at Divine Anyi communications computer village, Ikeja, Lagos as we speak. You can call Adom on 08060791362
Verdict
Are you planning of getting this Tecno M7? Well, its not a bad idea at all, considering that its almost the same thing as Tecno Phantom A with even small price. Furthermore, its running Android 4.2.1 which is what Tecno Phantom A+ is currently running only that Tecno Phantom A+ is quad core and 1.2GHz.
Finally, its far better than the Tecno P5, M3 and L3 in terms of camera, RAM and Screen + Resolution.
Like our Facebook page and follow in Twitter for latest tech info