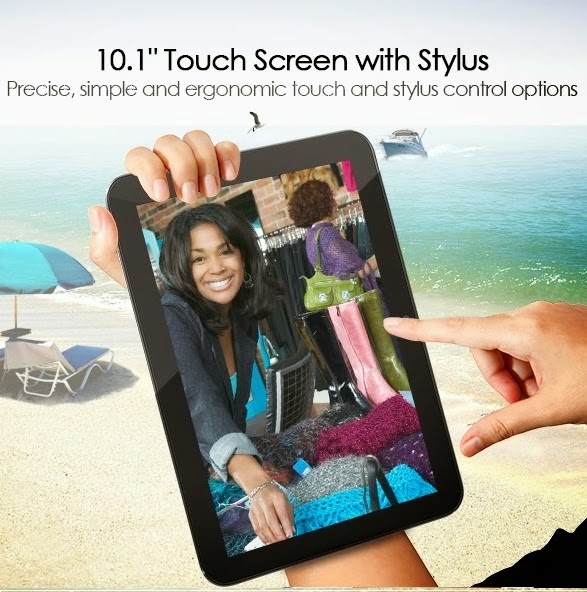 A Pad, a 3G smart Phone (Data Only), and a game console, The Infinix Joypad 10 is an amazing tab. The Joypad Enables all three in one. Driven by Qualcomm 3G technology, you?re never limited to downloads, applications and games anytime, anywhere. The Infinix Joypad 10 features an Android Jelly Bean 4.2.2 Operating system with an exceptional Quad Core 1.2Ghz Processor and 1G RAM. Its incredible 16GB Internal ROM Storage allows you to store music, videos, files and pictures of your loved ones and also allow you share them easily on social media apps like Facebook, Twitter, Instagram etc.The infinix Joypad 10 also comes with 5 MP primary and  secondary Camera that enables you take pictures wherever you are and allows you share your world with family and friends. This is just a perfect device for you.
The Infinix Joypad 10 comes with a nice colourful IPS WXVGA touch screen and a stylus pen for those that would really love to use a stylus pen on the device. The Joypad has a dimension of   256*175.5*10.9 mm which suggests that it?s quite slim and very handy.
Joypad 10 comes bundled with an efficient operating system Android Jelly Bean 4.2.2 with a good and responsive interface. The device has a RAM of 1GB which is able to handle task well and smoothly. Furthermore, the tablet comes with 16GB internal memory without a memory card slot to expand the memory.
Infinix Joypad has a 5MP camera for both front and back camera meaning that great images can be taken by both cameras. Also, making video or Skype calls would be great with the device and the back camera has LED flash attached at the side of the lens.
Battery capability of this device is excellent with 7000mAh this would ensure that device last as long as it should. Watching of movies and playing of games on the device would really be a joyful thing while there is nothing to worry about.


- Infinix Joypad 8s Android Tablet
If you are looking at getting a tablet that you can count on or trust it's quality, I believe that you've got one already - The infinix Joypad 8S. Infinix has once more released a new tablet known as the Infinix JoyPad X801 or simply Joypad...

- Infinix Joypad 10 Detailed Review
I have been waiting for a tablet that is of premium quality, 10.1 inch, and affordable for a  long time; finally, I found one. Infinix just launched their next big tablet, the Infinix X1000; this is the tablet that has all the things that are needed...