﻿ Whatsapp vs BBM: Which is Better?
Nigeria Tech

Whatsapp vs BBM: Which is Better?

Finally,  BBM has gone cross platform (Android, iOS and BlackBerry OS) for about a week now and million of Android devices are already pinging massively.
Whatsapp on the other hand have been around cross platform for a longer period and with a lot of users.
Alot of updates and refinement have been put into Whatsapp for Android and iPhone to give a very high user experience. 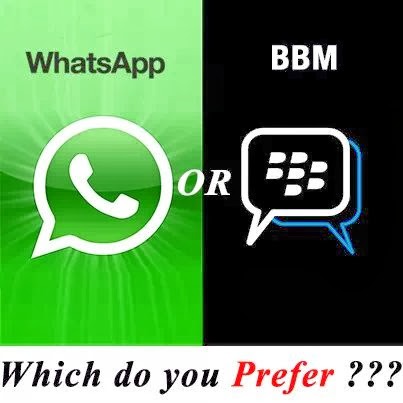 BBM on the other hand will just start the update which will include BBM Channels and Voice in the near future.
Now, for those that have both messaging apps on their devices, it won't be long before people start taking sides as to which of the two messaging apps they prefer.
Putting the question to you folks,  which do you think it's better considering that BBM is just 1 week old cross platform?
Drop your comments below and don't forget to like our Facebook page and to join this conversation. Also follow us on Twitter for more smartphone gists.


- Download New Facebook Messenger Update: Its Cool
Facebook just released an update to their Messenger app which a totally new user interface (UI).  With the outburst if IM apps and the recent addition of BBM going cross platform, most messaging apps are frantically working hard to enhance user...

- Bbm For Android And Iphone Not Releasing This Week
Looks like the wait for BBM to totally go cross platform will take longer than anyone expected. This was the case when Andrew Bocking, Head of BBM at BlackBerry released a statement on the Inside BlackBerry Blog which explains the problems that occurred...