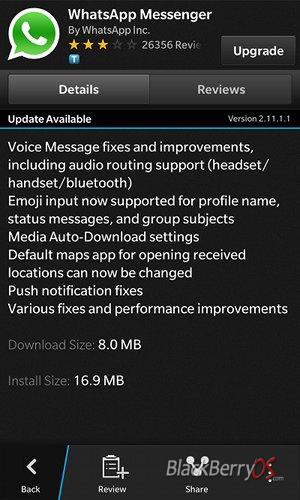 Various updates have been rolled out by Whatsapp over these past few months.
This could be due to the announcement by BlackBerry to make BlackBerry Messenger a cross platform app to run on Android and iOS.
Of course, if BBM goes cross platform, Whatsapp usage will diminish significantly .
In other to stay useful and not lack any feature that the BlackBerry might have, Whatsapp have decided to release various recent updates that would give users better experience and more stability.
The latest Whatsapp update to BlackBerry 10 comes with bugs fixes, enhancements and including the following:
1. Fixes and Improvements to voice message
2. Emoji input support for Messages
3. Default maps app opening when received.
4. Push notifications fixes
5. Media auto download settings
As usual, this update can be downloaded from the BlackBerry World.
Source: BlackBerryOS


- Blackberry: New Bbm Will Increase File Transfer Limit Above 6mb
I love using BBM for chatting, its very good but when it comes to sending files, i abhor BBM. One of the issues I have with it is that it has a size limit of 6mb before you can transfer file. That means, if you want to transfer a high res image of 6.5mb,...

- Download New Facebook Messenger Update: Its Cool
Facebook just released an update to their Messenger app which a totally new user interface (UI).  With the outburst if IM apps and the recent addition of BBM going cross platform, most messaging apps are frantically working hard to enhance user...

- Whatsapp Vs Bbm: Which Is Better?
Finally,  BBM has gone cross platform (Android, iOS and BlackBerry OS) for about a week now and million of Android devices are already pinging massively. Whatsapp on the other hand have been around cross platform for a longer period and with a lot...