YouTube recently updated their app for both Android and iOS to versions 5.0 and 2.0 respectively.
This new update brings a new very important feature to the table. This new feature allows one to watch a video and in the process search for another video to watch.
This new multitasking feature is almost like having a split screen, where one screen play the present video being watched and the one below gives you the option to search for playlist or view comments to currently playing video.
Alternatively, you could move the screen of the present video below in one corner and then search for videos at the top part of the screen. At any point, you could move the presently playing video to any part of the screen or make it full screen by turning your device horizontally. 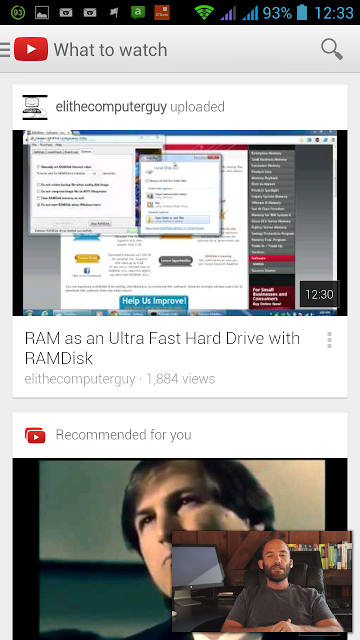 Furthermore, when your search results are returned, you can click on the "play all" button to play all the videos in the search result. Isn't this awesome?
YouTube user experience is getting better for every update released and Android and iOS users are really loving it. However, Windows Phone users won't have this same experience as there is still issues between Google and Microsoft that is making Google block Windows Phone devices from enjoying the latest YouTube experience.
You can download or update your YouTube app from the Google Play Store and Apple App Store as needed by your device.


- Split Screen Multitasking On Ipad With Ios 8 Announced
iPad is set to receive split screen multitasking feature when loaded with the iOS 8 firmware as announced by Mark Gunman of 9to5Mac. calendar and safari shown in split screen This new feature would make the iPad able to display 2 or more apps on...

- How To Download Youtube Videos Directly To Your Ios 7 Iphone
One of the great things of having a smartphone is that you want to watch videos, sometimes, you don't want to stream the video online but you want to download and watch at your convenient time. While Android devices have a variety of YouTube video...