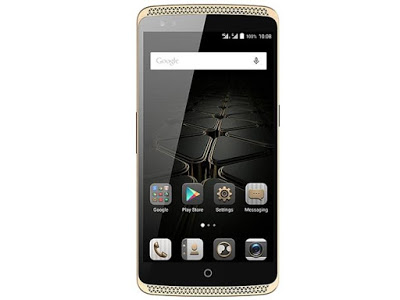 ZTE launched the global version of its Axon smartphone, the ZTE Axon Elite at the IFA 2015. The handset will reach France, Germany, Italy, Spain and the United Kingdom on September 24. And countries like Turkey, Mexico, Singapore, Malaysia, Thailand, Hong Kong, Russia and the Philippines would get the smartphone later.
The dual-SIM ZTE Axon Elite comes with similar specifications like seen in the original ZTE Axon (aka Axon Pro), which was launched in the US in July this year. The differences between the two models are that while the ZTE Axon has QHD (1440x2560 pixels) resolution display, the Axon Elite comes with lower full-HD (1080x1920 pixels) resolution display. However, the Axon Elite comes with biometric authentication methods such as fingerprint, voice and eye scanning sensors, which are not there in the ZTE Axon.
The Android 5.1.1 Lollipop-based ZTE Axon Elite features a 5.5-inch display, and is powered by a 64-bit octa-core Qualcomm Snapdragon 810 (quad-core 1.5GHz + quad-core 2GHz) processor clubbed with Adreno 430 GPU and 3GB of RAM.
The highlights of the metal-clad ZTE Axon Elite is its dual-lens (13-megapixel + 2-megapixel) rear camera with BSI CMOS sensor and dual-LED flash. The dual-lens camera lets users refocus an object after the image has been captured. The rear camera can also record videos in 4K resolution. The smartphone houses an 8-megapixel front-facing camera. It also bears 32GB of inbuilt storage and misses out on microSD card expansion. The connectivity features included in ZTE Axon Elite are 4G LTE, Bluetooth 4.0, GPS/ A-GPS, Wi-Fi, and USB. The smartphone is backed by a 3000mAh non-removable battery.
General
Display
Hardware
Camera
Software
Connectivity
Sensors
Read more here http://gadgets.ndtv.com/zte-axon-elite-2940


- Xiaomi Redmi Note Prime Detailed Specifications And Price In Nigeria
Some weeks ago, Xiaomi - the fourth largest smartphone producer in the world launched two smartphones (Redmi 2 and Mi 4) in Nigeria and it has been available at an amazing price. Coming to the market now is the Redmi Note Prime Phablet, with a spectacular...

- Lg G3 - Specifications And Features
LG G3 is an Android smartphone developed by LG Electronics . First released in South Korea on May 28, 2014, it is a successor to 2013's LG G2. Inheriting design elements from the G2, such as its thin screen bezels and rear-mounted power and volume...

- Lenovo Phab Plus - Specifications
Have you heard about the new lenovo phab? Well, Lenovo phab plus is a bigger step-up over lenovo phab. Lenovo Phab Plus smartphone is with 6.80-inch, 1080x1920 display powered by 1.5GHz processor alongside 2GB RAM and 13-megapixel rear camera. Check...

- Lenovo Phab Smartphone - Specifications
Lenovo is a Beijing comapny that was founded in 1984, Lenovo acquired IBM's PC business in 2005, and first became the world's top PC maker in 2013. It entered the Android and Windows tablet market in 2011, began selling Android smartphones in...