﻿ 12.9inch iPad shown off and Ready for Release
Nigeria Tech

12.9inch iPad shown off and Ready for Release

Rumors of Apple intending to release a 12.9inch iPad is already going through the internet within the past few hours. 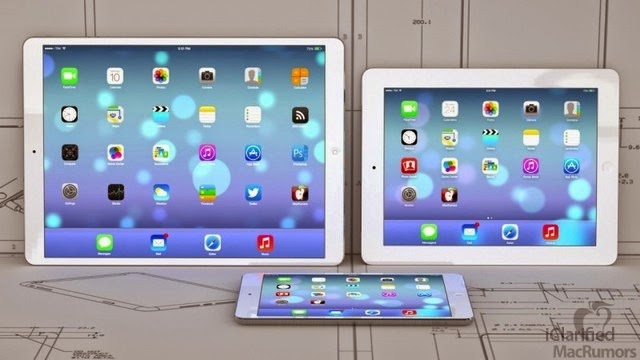 The Wall Street Journal (WSJ) first release the notion that Apple will release a 13" iPad in one of their articles in 2013.
By 2014, this news have become more plausible as Bloomberg recently revealed that Apple have started putting things together to make the 12.9 inch device ready for release in 2015.
If Apple do indeed release a 12.9inch iPad in 2015, then it will be in direct competition to the likes of Samsung Pro 12inch tab and Microsoft Surface tablets.
The stakes are high in the mobile and computing industry and if the market for larger display tablets is large enough, Apple will definitely join in the market; something we've seen Apple do during Tim Cook reign with the release of iPad mini and the soon to be released Apple phablet - the iPhone 6.
Like our Facebook page and follow us on Twitter for more smartphone news and tutorials.


- Report: New Features For The 12 Inch Ipad
After many rumors and discussions about the so called "iPad Pro" online, there appear to be a more factual information that has shed some light on what Apple is going to bring the world with respect to the newest iPad. It's not hard to notice that...

- Retina Display Ipad Mini And Ipad 5 To Be Unveiled Tomorrow
When it comes to tablets, Apple's iPad is the highest selling tablet and of course, the preferred. The iPad mini and regular iPad has always been a successful product and Apple have always out-do competing products. Tomorrow 22nd October, Apple is...

- Samsung Wins Case And Apple Lost
Battles are fought everyday in this present age and Apple vs Samsung is one of those battles that go way back and seems like it will never end. While Apple is always in the attack and Samsung in the defense and the court is the middle ground where all...

- Teenager Dies Because Of Apple Ipad
Gadget theft has become an issue in recent times and smartphones are not left out, especially Apple smartphones and tablets. Although, its understandable to resist and fight back when someone tries to steal our belongings but most times, we learn to let...

- Thieves Broke Into Microsoft Office And Stole Ipads
Yesterday, it was reported that thieves broke into the Microsoft's campus in Mountain View on The 19th and 26th of December 2012. This incident was reported to the police on wednesday 3rd 2013. According to the info, 2 iPad 2, 2 iPad 3 and 1 iPad...